Marcus Cook took that first step and feels unstoppable after losing 264 pounds and becoming a triathlete. Learn more about Marcus and his journey then sign up for your free training plan and become a triathlete today. 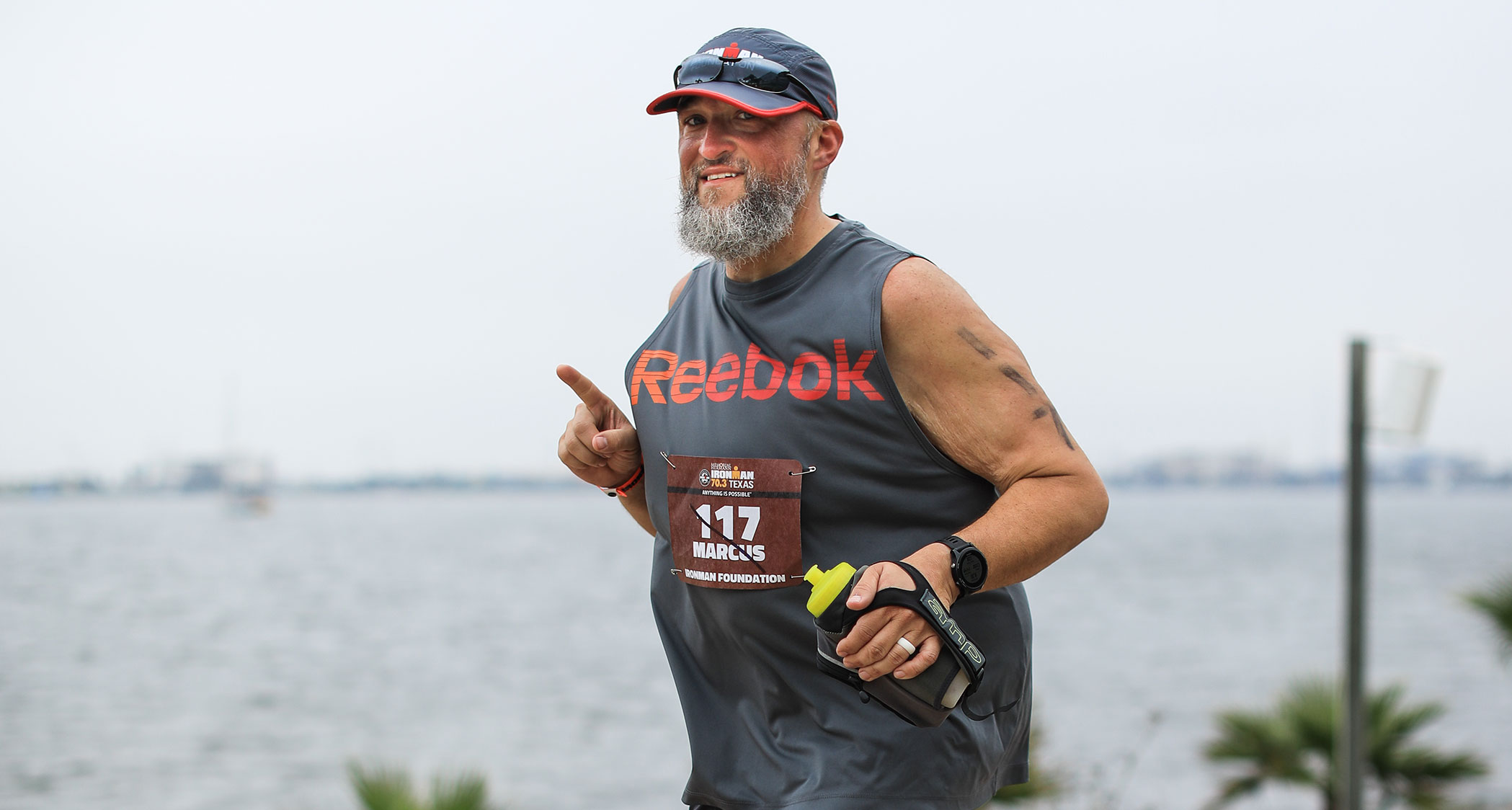 From Nearly 500 Pounds to Triathlete

This story originally appeared in the Summer 2018 issue of USA Triathlon Magazine.

If someone used the phrase “ripple effect” in regard to Marcus Cook prior to the fall of 2015, you would have first thought they were referring to the jiggling of his fat rolls while the jovial man was recounting a funny story.

Weighing in at 489 pounds, Marcus Cook was the last person you would have thought would ever create a ripple effect in terms of influencing others to live a healthy life. But, many pounds lighter and a year later, he was inspired to do a triathlon, and in the process has ended up inspiring many other people to take up the sport. One of the ambassadors for the Time to Tri initiative, a collaborative effort of USA Triathlon and IRONMAN, Marcus has been preaching the gospel of triathlon to all who will listen. He has converted many people — including other 500-pound men — through his connections in the gym, workplace, family and also online, through the 3,800 followers on his Big to Little Facebook page.

Marcus’ story
The son of a preacher, Marcus started putting on weight at an early age, living in a household where heavy Sunday dinners were the norm and eating and socializing were intertwined. He kept adding weight throughout the years. He’d lose some at times — the result of fad diets and a lap band surgery — but the weight always returned and he ballooned up to almost 500 pounds. In the summer of 2015, a friend dying of cancer gave him a message. Marcus recounts, “He told me, ‘I’m dying because of an incurable disease. You’re dying because of a choice. I want you to live and be there for your family.’”

That September, Marcus underwent gastric bypass surgery. But more importantly, he underwent a dramatic change in his mindset — realizing this might be his last chance to make a permanent change. He altered how much and what he ate, and is now on a plant-based diet. He started exercising, beginning with a short walk in his neighborhood that left him sweaty and exhausted. His walks became longer and longer, and then he slowly mixed in some jogging. Next he added cycling, and last came swimming.

In less than a year after surgery he did his first sprint triathlon. He kept moving the goalposts as he kept setting — and then achieving — his goals: An Olympic-distance triathlon. The Chevron Marathon in his hometown of Houston. An IRONMAN 70.3, completed in April of 2017. Three weeks later, Marcus Cook did what many would have thought impossible a year and a half and 260 pounds earlier: he finished IRONMAN Texas, with a time of 16 hours, 31 minutes.

Influencing others
Through reaching these physical goals, Marcus is accomplishing his other main goal: creating a positive difference in the lives of others. For Marcus, that ripple effect involves both setting an example that others can follow and directly encouraging others to try something new.

The family member
Marcus has spread his love of triathlon to three of his children. His 11-year-old daughter, Emma, has competed in kids triathlons. Sixteen-year-old Jackson has done a few sprint triathlons. The triathlon bug also has hit 19-year-old Zach, who has not only done some sprint triathlons, but is currently training for an IRONMAN 70.3 race with Marcus in Boulder this summer. He plans on doing a few more 70.3s in the next year before tackling IRONMAN Texas with his old man in 2019.

“I started thinking about doing triathlon when he had done a couple sprints,” Zach says. “For the most part, it was like father like son. I started running — I did my first half-marathon in April 2017, and then I did a sprint triathlon and it just took off after there. I got addicted to it.”

Zach, who was a lineman on his high school football team, had struggled with weight all his life, and his father’s obesity had served as a warning sign for him.

“I never wanted to end up like my dad, and I could see myself getting there, by eating all the wrong foods and getting into bad habits,” he says.

The co-worker
David Keymer and Marcus shared the same mentor, Chuck Dalio, the man who died of cancer and exhorted Marcus to change his life. Keymer, who had completed a few sprint triathlons years ago, was inspired by Marcus’ journey and decided to get back into the sport, and in a big way.

“Doing an IRONMAN had been on my bucket list forever, but it’s never a good time,” says Keymer, who was a business competitor of Marcus prior to his company buying out Marcus’ pipeline supply company. “So, to see him to do it and train was pretty awesome, so I signed up and he helped me through the process. I thought to myself, ‘Crap, if this guy can lose two of me and do it, there is no excuse.’ It’s very inspiring to see what Marcus did.”

Keymer bypassed doing the Olympic-distance and 70.3 races and went straight to the 140.6, completing the 2018 IRONMAN Texas in 11:39. He hopes to do a few 70.3s to keep in shape before trying IRONMAN Boulder next year.

The guy at the gym
Brad Kendrick’s triathlon trajectory is almost identical to Cook’s. He once weighed slightly over 500 pounds and started going to the gym, where he first met Marcus in December 2016.

“I had never before considered a triathlon before I met that man,” Kendrick says. “I was at the gym one day, trying to shed a few pounds and he started to tell me his story about how he lost his weight and his swimming, biking and running.”

Now down to 380, Kendrick recently completed his first triathlon in Austin, Texas, on May 27. He met his goal of not finishing in last place, even with cramps keeping him from his other goal of breaking two hours.

“But, there’s always another one,” Kendrick says.

Kendrick isn’t content to just try another sprint triathlon, though. “I’m hoping to do an Olympic-distance triathlon at the end of this year,” he says.

“My long term goal is to do an IRONMAN 70.3 next year, and then if it takes me to the full IRONMAN, I’m going to trudge through and make it. I think I can do it one day. I believe in myself, and I have people like Marcus who believe in me, too.”

Kendrick, who was inspired watching Marcus finish his two IRONMAN 70.3 races in Galveston and his two IRONMAN Texas races, is following Marcus’ path in trying to bring the sport to other people.

“I’m just like Marcus and trying to spread the word,” Kendrick says.

The friend of a friend
Like Kendrick, Jeff Cotrell weighed 500 pounds before he started his journey toward triathlon. He met Marcus through a mutual friend and doctor, Dr. Garth Davis, in December 2016.

“When I first saw Marcus, I was probably down to 430,” Cotrell says. “We would run in the same parks.”

Five months later, as he was working as a nurse for Memorial Hermann at the IRONMAN Texas finish line, he saw Marcus complete his first IRONMAN.

“Seeing him do that first IRONMAN was so inspiring,” Cotrell says. “It was like, ‘Wow.’ It was very important for me.”

That experience and future conversations with Marcus led to Cotrell adding cycling and swimming to his exercise routine. “I was looking for other ways to exercise, break up the monotony, and every time I talked to Marcus, he’d talk about triathlon and say, ‘Once you start it, you’ll be hooked.’”

And so now, down 210 pounds, he is hooked, and will do an Olympic-distance triathlon in Kemah, near Houston. He hopes to do the Chevron Houston Marathon in January, then a 70.3 in Galveston next year, and then hopefully a full IRONMAN next year or the year after.

As is the case with Marcus, there is a ripple effect: Cotrell’s wife has lost 100 pounds and just bought a bike, and a co-worker at Memorial Hermann has joined the triathlon train.

“She was on the fence about doing a triathlon, and as soon as I showed her I had signed up for a triathlon, immediately she signed up to do the same triathlon,” he says. “It’s already another degree of separation.”

Online
One of Marcus’ 3,800 Facebook followers is Murdock Havard, a former Louisiana State University football player who first learned about Marcus at the River Cities triathlon, when he saw the commotion around Marcus’ finish. Havard was 340 pounds and at the event as a spectator. One hundred pounds and year later, he was a competitor at the race and met Marcus in person.

“Marcus reminded me of things that I used to know a long time ago,” Havard says. “First of all, we should all strive to be better than we were yesterday. Not just a better swimmer or cyclist or runner; but a better father, son, husband, employee and boss — a better person. But more importantly, take time to really have the joy and pay it forward. There are people out there who are afraid to take that first step. I’m not Marcus Cook, but I can encourage someone gutting out that last 100 yards of a race.”

Havard is now training for an IRONMAN 70.3 race.

Spreading the triathlon spirit
“The people around you can be influenced by your testimony of what the spirit of the triathlon is. You don’t have to have a big story to reach a giant audience,” says Marcus, sounding indeed like a son of a preacher. “It’s about the people around you who you can influence by just telling them that it can be done. Whenever you find yourself changing and you’re looking to inspire, you just need to look at the people directly around you.”