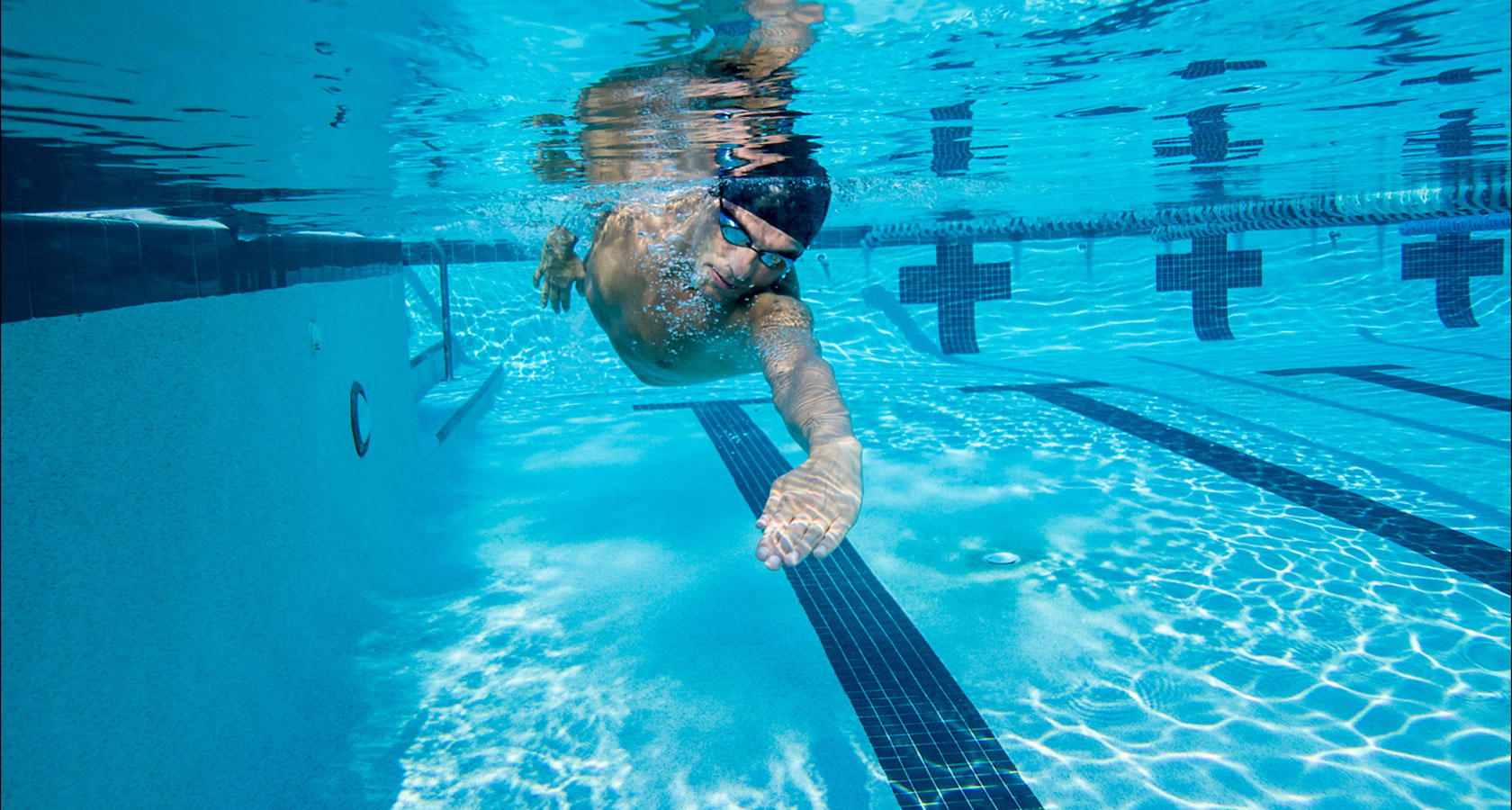 By Linda Cleveland and Kris Swarthout

By Linda Cleveland and Kris Swarthout

Because swimming is a technical sport, simple improvement in one area can have residual benefits in others. For instance, by simply improving an issue such as eye and neck position, you can improve your body position and level in the water.

*referenced figures located at the bottom of this article.

Entry
The entry, as shown in figure 5.1, is the point where the hand enters the water fingers first and palm down. The entry point should be about halfway between the tip of your nose and the point where your hand fully extends away from the body. The hand should enter the water cleanly and create a minimal amount of bubbles as it extends forward to its furthest most extension point. This hand travel path should be flat and in line with both the body line and the surface of the water. The fingertips should end about 4 inches (10 cm) under the surface of the water.

During the entry, your eyes should remain focused toward the bottom of the pool and your neck should remain in a neutral position, meaning that it is in line with the rest of your spine. This neck and eye position should remain constant throughout the entire swim stroke cycle except when you breathe.

Some of the common errors seen during the entry are improper hand position in which the thumb enters the water first, hand entry too far forward causing the arm to slap in the water, and eyes rising to look forward. By allowing the thumb to enter first, you introduce another element of motion into the stroke because you will have to roll the hand to position it for the catch. This angled entry can also contribute to a slight deviation in your course that may not be evident in the pool but will often materialize in open-water swimming.

Practice the hand entry in shallow water by standing and slowly going through the motion. Have a partner watch to see whether you are doing what you think you are doing. Repeat this movement multiple times at different paces to ensure that you can execute it during your normal stroke. Slapping your arm in the water not only creates unwanted resistance by allowing your upper arm to enter first but also causes more drag by not entering at the most efficient angle. This result is visually evident by the production of bubbles. Your eyes should always be looking toward the bottom of the pool at about an 85-degree angle from the level surface of the water. When you look forward you take your neck out of neutral position and cause your hips to drop.

A simple exercise to establish this is to stand straight and then look up. You will notice that your hips eventually roll forward and your neck begins to hurt (see figure 5.2a). Instead, keep your eyes down and your neck neutral (see figure 5.2b). If you’re afraid of the wall, use your peripheral vision and trust that the tee at the end of the black line will never move and will always be the same distance from the wall, every lap. A great way to promote keeping your eyes down is to swim with a snorkel. The simple breathing position required to avoid sucking water into the snorkel will show you the correct head position.

Catch
The catch, as shown in figure 5.3, is the point where you first begin to grab water. The arm stays straight forward, but the wrist bends to a 90-degree angle, leaving the fingers pointing toward the bottom of the pool. The catch is a simple yet often overlooked element of the swim stroke. Most swimmers move from the entry straight to the pull because they fail to see the importance of the catch. This small motion anchors the hand in the water and sets up the pull. The catch phase is your first chance to grab water and create forward velocity.

A mistake often seen is a lack of any catch at the beginning of the stroke. A good exercise to help promote the catch and strengthen your forearms is sculling. Sculling is simply cupping the hands in an attempt to catch water without any other movement of the arms (see figure 5.4). With your arms stretched in front of you, slightly cup your hands and bend your wrists so that your fingers point toward the bottom of the pool. You should kick slightly but not so much that you negate the purpose of the drill, which is to create forward velocity with your hands. The kick should be just enough to keep your body horizontal in the water. Move your arms in quick, horizontal movements to maintain your head above the water’s surface. Think of scooping out a big bowl of brownies with your hands or think of your hands as canoe paddles that you are moving left and right to pull your canoe into a dock.

Pull
The pull, as shown in figure 5.5, is arguably the largest producer of velocity in the entire stroke. The pull begins with the engagement of an early vertical forearm. Essentially, after the wrist bends, the next joint to be engaged is the elbow. As the elbow bends to 90 degrees, the fingers remain pointed to the bottom of the pool and the forearm moves to a vertical position, creating a large pull surface with the inside of the forearm. The forearm vertical position should occur before the hand travels past the shoulder. After vertical position is achieved, the hand and forearm should travel back along the body towards the hip. This path should remain straight and within 8 inches (20 cm) of the body. The straight travel path maximizes forward velocity by creating direct thrust backward. By keeping the hand and forearm close but not too close to the body, you maximize the use of leverage. For the same reason, you don’t carry a large box far away from your body because you are not strong in that position; you can move more water faster if your hand and arm are closer to your body. Avoid getting too close because you will then be pushing water that is already flowing around your body. At that point you lose power because the water you are pushing is already going backward.

A common mistake seen during the pull is a lack of early vertical forearm, or EVF. Instead, swimmers round the hand and arm down, pushing most of the water to the bottom of the pool. The hand and arm stay flat in the water and contribute little or nothing to forward thrust and velocity. A great exercise to promote early vertical forearm is the fist drill, which is as simple as it sounds. Instead of using your palms to grab water, you swim with a closed fist, forcing the forearm to catch and move the majority of the water during the stroke. As you do this, you should feel the water affecting the inside skin of the forearm. You should also feel a bit more tension in your shoulder. To understand this, stand on dry land, stretch your arm out in front of you with your elbow facing up, and keep your hand extended with your palm facing down (see figure 5.6). If you do this correctly, you should feel a tightening in your shoulder area; we call this an engaged shoulder. Only when the shoulder is engaged will you be able to execute correct early vertical forearm position. Athletes commonly drop the elbow as the shoulder fatigues, thus losing the ability to execute early vertical forearm positioning.

Exit
The exit, as shown in figure 5.7, is the phase of the stroke when the hand finishes the pull and leaves the water in route to the recovery. The exit may seem insignificant, and if done properly, it should have little to no effect on the stroke. But if the exit is done incorrectly, it can cause an imbalance in the following phases. During the exit, the hand should push and exit the water past the hip with the fingers still pointed toward the bottom of the pool. The hand should not twist or flick as it exits the water. The two most common mistakes in the exit phase are an early exit and improper hand position as it leaves the water. An early exit normally occurs when you attempt to swim fast. The goal is to increase your stroke count to achieve greater speed, but what often ends up happening is that you shorten your stroke, which decreases the velocity you create. Ultimately, you end up doing what looks like a dog paddle—fast strokes with little speed. You are better off keeping a forceful long stroke than having a fast turnover. If your hand is not in the correct position and it leaves the water (fingers down), you will likely end up pushing water to the surface, not behind you. This action not only diminishes your forward velocity but also pushes your body down slightly. This slight movement can then affect body position, which in turn increases drag. You begin to see how one thing can affect numerous other phases down the line.

Recovery
The recovery, as shown in figure 5.8, is the time when you give your hand a short rest. During the recovery, the elbow should be high in the air to promote good body roll, and the hand should dangle limply with the fingers just above the water. The path should be straight forward from the exit point to the entry point. A common error often seen during the recovery is winging or flailing the arms out to the side. Winging or flailing is caused by inadequate body roll. When the body doesn’t roll to an angle of 35 degrees or greater, the shoulder does not allow the elbow to bend and recover in a high position. A flat body position forces the hand to recover wide. This action may not affect you in the pool, except when you whack your lane mate in the head as he or she passes you going the other way, but in open water your arms will not be able to recover over waves and you may smack other swimmers over and over again in a packed triathlon swim group. One of our favorite drills to correct this issue is a fingertip drag drill with zipper. As your hand leaves the water, drag your thumb up the side of your ribcage like a zipper while at the same time dragging your fingertips across the water. This body position forces you to roll and ultimately helps you recover in the correct position.

Republished from "Train to Tri: Your First Triathlon" from Human Kinetics.

Linda Cleveland and Kris Swarthout are the authors of “Train to Tri,” a book that provides training plans, strategies, and preparation advice for first-time triathlon competitors.

What Do I Do in the Pool?

But What If? Overcoming Fear of Triathlon